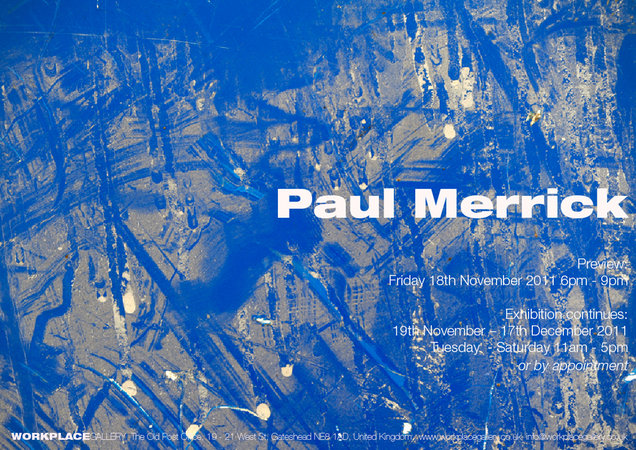 Workplace Gallery are pleased to announce our first solo exhibition by Paul Merrick.

Paul Merrick combines painting with sculpture, and the made with the ready-made. Investigating colour, form, and architectural and spatial arrangement in relationship to Painting as a subject and discipline in and of itself; Merrick’s new work is the result of a sustained interrogation of painting and process in relation to the found object.

Untitled 2011 is a commanding steel structure that refers to a found metal armature. Merrick has played with status of the original object, first simplifying its linear form then amplifying it to create an oversize almost comical object, which loses its function entirely. Finished with an industrial yellow powder coat paint finish, an oversize leatherette cushion upholstered in the style of Mies Van Der Rohe’s Barcelona Chair, and inserted planes of sterling board that serve both to delineate and interrupt the space within the structure, and as proxy to painterly brushstrokes. Untitled invites us to reconsider our initial haptic and perceptual encounters with objects whilst proposing a reassessment of the semiological status of material and form in relation to design, style and function.

Merrick’s light works again substitute found and functional material for painterly mark and gesture.Untitled (Big Plate) 2011 is a drawing of a found glass plate using fluorescent green strip lights. The plate has been removed creating a simple frame of light interrupted by the black rubber flex looped across the picture plane. In Merrick’s work the accidental and contingent mark is given status that is knowingly bartered with the historical canon of modernity. This approach is extended in Merrick’s new series of ‘Found Paintings’. Carefully selected objects such as used and discarded scrap metal, table tops, and dusty panels are presented as Paintings, challenging the viewer to look beyond speculation about former use and action, towards acceptance of each object and surface as aesthetically final and complete, a reclamation and assertion of Painting through the artistic legacy of the found object.

Paul Merrick was born in 1973 in Oxford, UK. He lives and works in Gateshead and Newcastle, UK.

The next exhibition at Workplace Gallery will be a solo exhibition of new work by Cath Campbell opening in 2012.

To celebrate the opening of Paul Merrick please join us afterwards at Central Bar in Gateshead.

Workplace Gallery was founded in 2005 by artists Paul Moss and Miles Thurlow. Based in Gateshead UK, Workplace Gallery represents a portfolio of emerging and established artists through the gallery programme, curatorial projects and international art fairs. Workplace Gallery is currently at The Old Post Office, Gateshead; a listed 19th Century red brick building built upon the site where the important British artist, engraver and naturalist Thomas Bewick (1753-1828) lived and died.